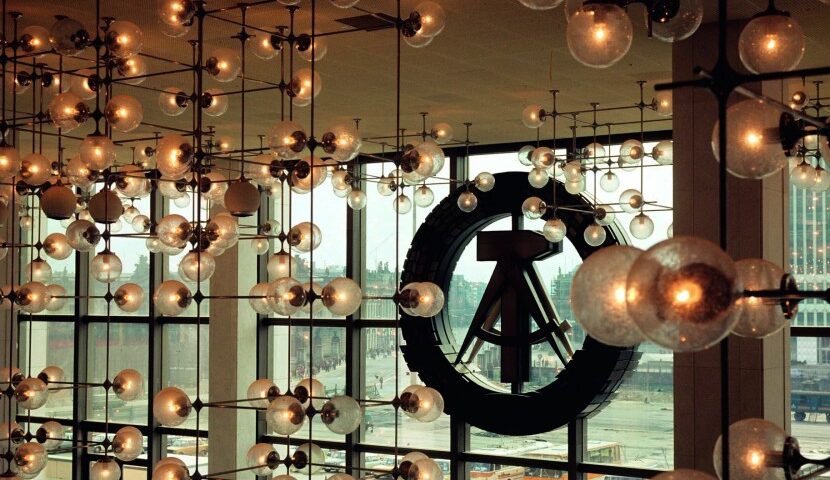 I walk past Schlossplatz where the new Humboldt Forum building is currently under construction. It’s on the site of the former Stadtschloss (Berlin City Palace), which was badly damaged in World War Two, and its ruins demolished in 1950 by the DDR in order to build the Palast der Republik. I was here in 2007 just in time to see the Palast der Republik in turn being demolished to rebuild this: The Humboldt Forum, a three facade-only replica of the original Stadtschloss.

The Palast der Republik was a building I’d wanted to see on my first trip to Berlin. I remember walking along Unter den Linden thinking: it must be here somewhere? Slowly as I approached a building site with high cranes and a skeletal metal shell, I realized this was all that remained. It didn’t occur to me that the Germany would ever decide to demolish the grand Palast der Republik. The communists tore down the Stadtschloss because of the buildings perceived political history, and the West Germans removed its successor for exactly the same reason. Can architecture even be political? Don’t humans just plaster their own agenda onto buildings which are essentially just concrete, glass and steel?

Designed by a group headed by Heinz Graffunder, the Palast der Republik was opened in 1976, and was a wonderful example of modern architecture — a vast departure for a city that had spent several decades trying to rebuild and recreate its shattered past. 180 meters long, 85 meters wide and 32 meters high, it housed the Volkskammer (the Parliament of the DDR) and an immense auditorium where the Socialist Party of Germany met every five years. It also housed art galleries, a theatre, 13 restaurants, a bowling alley, a disco, and a post office, and was open to the public every day.

The exterior was rectangular shaped and clad in white cut marble sheets, its focal design point being vast bronze colored mirror glass on one facade. It was a plain modernist exterior that would make the Bauhaus design school proud. Inside though, it was something else. Anything but bare. Grand foyers, vast spaces, filled with sleek modern furniture, arrays of beautiful round lamps on the ceiling… it gave an air of opulence and beauty, in typical communist style, without ostentatiousness. There was a tasteful, human atmosphere to the Palast der Republik. Trump Tower, this was not.

Always filled with people, because the Palast der Republik had been designed for the use of the people, and use it East Germans did. They piled in for concerts and performances, ate at the restaurants… they enjoyed and used the space that was created for them. Palast der Republik was never intended to be a gray parliament building of the elite.

After the fall of the Berlin Wall, the East German parliament that the Palast der Republik housed effectively ceased to be, then in 1990, after reunification, large amounts of asbestos were detected and the building closed. After eight years of indecision and neglect in which attempts were made to remove the asbestos, it became clear that leading West German politicians such as Chancellor Helmut Kohl, just wanted the building gone.

Come 2000 50% of East Berliners still wanted to retain the Palast der Republik, over 50 demonstrations were held in an attempt to save it, and prominent names in Germany’s architecture and urban planning professions signed a petition objecting to removal of the building. Many East Germans who had lost their country, now watched as architecture of their past was also wiped from the landscape. From 2003-2007 the building was dismantled, leaving for many years a gigantic, cold, empty hole in the city.

When you are no longer a tourist in Berlin, then the city expands dramatically. You walk around and slowly pieces fall into place. You see the larger picture of the city. I meet a German friend and we sit and look at the early pre-fab concrete stages of the Stadtschloss replica which will assume the space. We chat a little about architecture, and I probably have hints then I will not see her again.

I wonder about appreciating what we have only after it’s gone? I realize how different the districts here are, and begin to appreciate all the green, the canals and the parks, the vast beautiful platzs — I never expected to find such beauty in a city.

Yet it remains a city with an obvious dearth of exciting modern architecture. The Palast der Republik was one.

Berlin’s a city that was divided for 40 years, and that divorce brought up many disagreements and betrayals by either side. The reunion, like those of couples who have drifted apart and come back together, is difficult due to this painful nature and tainted memories of the past. Perhaps erasing that history, important though it may be, is the only way possible to move forward. Even if some of those memories are buildings.