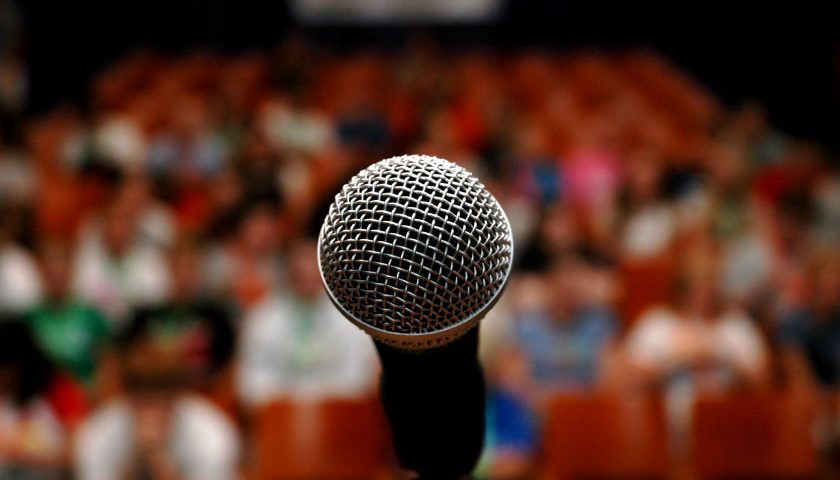 You stand, and then the panic begins. Sweaty palms. Difficulty breathing. Feels like you’re unable to talk. You remember your notes and glance down. They seem a blur. As you lift the paper higher you notice your hands are shaking.

Welcome to the joy of public speaking.

Don’t worry. You’re not alone. Warren Buffett suffered from public speaking anxiety. Richard Branson too. “I loathe making speeches, and always have,” the Virgin media CEO says. “I deliver a lot of them these days, but it’s almost as true today as it was when I first spoke in public as a student some 50-odd years ago.”

I too recall the first time I had to do any real public speaking. It was also at university. Giving a lecture to fellow students on the finer details of my market research project. I felt it would be a disaster, and it was. My research project wasn’t that great and the speech behind it—even worse. I stumbled through, lots of ums and ahs, lost my place, and sat down. I no longer cared about my mark—just thankful it was over. I think the other students were glad too. Somehow I salvaged it all in the final exam and walk away with an A+.

Public speaking is something pretty much everyone has struggled with at some point or another. Except perhaps those annoyingly perfect etroversts we all hate. You know the ones. It’s a problem that’s relevant in the digital age. We might all be competent Tweeters, Facebookers and Snapchatters, but what about real face-to-face communication? How about if there are 20-100 of those faces facing back at you?

Speaking is an art. Having something to say, even more so.

Just a few years later I had to give another talk about marketing to a group of film students. I was dreading it. But you know what happened this time? I stood up in front of the darkened lecture room and I talked. This time I hadn’t prepared notes. I just talked about what I knew, and by this stage I knew my job pretty well. I knew the dos and don’ts. I had a few anecdotal stories. I had something to share. The students seemed interested and asked some questions and hopefully went away knowing a little more.

Okay, you might be thinking. That’s all very fine and dandy if I’m to give a speech on the complete works of David Bowie, or WW2 fighter aircraft of the European theater, or (insert passionate interest of your choice), but often, particularly in business, we have to give speeches about topics we don’t particularly know about, or aren’t passionate about.

First, within most topics, you can find your passion. Find the angle that most affects you and talk about that.

Second, there are ways you can prepare yourself for almost anything.

In the YouTube age, it’s easy to watch and learn from the best. Watch some CEOs. What are they doing right (or doing wrong?) How well’s the audience reacting to what’s being said? How can you incorporate some of their more lyrical tools into your own repertoire?

No—don’t try comedy, if it doesn’t come naturally to you, instead see what others do that fit your personality. Listen to their phrasing. Their words. Most great speakers use short sentences. They use a pause for dramatic (or comedic) effect. A speech needs to ebb and flow like the oceans tides, not rush over the audience like a white-water river torrent.

Steve Jobs is a good example. The Apple founder is a storyteller. One of his most famous quotes on the topic is:

“The storyteller sets the vision, values and agenda of an entire generation that is to come and Disney has a monopoly on the storyteller business. You know what? I am tired of that bullshit; I am going to be the next storyteller.”

Jobs even used traditional narrative structure in his speeches and product launches. A formula, pure and simple that you can learn yourself.

Act One: The status quo. We meet the characters and learn about their life at the moment. In this first act an inciting incident occurs that will set the scene for the future. Something changes. Innovation comes along.

Act Two: A series of obstacles which must be overcome are presented to the hero. In a business context: poor sales, intense competition or a myriad of interrelated system problems.

Act Three: The conclusion and resolution. Everything is fixed. The world is ultimately a better place. The solution could be a product, a new process, or a new way of looking at the world.

Using this structure will keep listeners wanting to know more—right till the end. It also gives you something to hang your ideas on. You’re less likely to get lost if you know where you’re going.

Get up early and go for a run, cycle, or gym workout. The endorphins released naturally through exercise will lift your energy to where it needs to be: excited and enthused about what you’re about to say.

There’s nothing like exercise for a natural high, and your audience will respond better to your increased energy.

Anxiety can lead to a dry mouth, so make sure you’re hydrated and keep your throat well lubricated. Water’s better than sugary sodas or other drinks (including energy drinks) which can often make you even more parched. Drink before, during and after your speech. Extra tip: maybe think about a quick bathroom visit right before you step up to the podium.

While many herbal stress relievers can also make you dozy (not a good look while in the middle of a speech) L-theanine is an amino acid that researchers have found acts directly in the brain to reduce stress and anxiety without making you pass out.

You can get it as a supplement, but why not just try a calming green tea where it occurs naturally?

There’s nothing more mind-expanding than education.

If you find yourself in a position where you’re regularly giving talks (for your job, most commonly) then invest the time, money and effort into learning ways to achieve better results. You can join Toastmasters, an international organization that assist members with the art of speaking, or take a dedicated public speaking training course. You’ll get a lot more tips and pointers than there’s time to go into here, and meet other people in the same predicament. Probably some of them will be a lot worse at speaking than you are! At the very least you’ll quickly discover you’re not alone.

Fees vary, but what is the price of vanquishing debilitating terror? Enrolling in a public speaking course was one of the first steps Warren Buffett took to get past his phobia. He also took a night class, teaching investment to students, to push himself out of his comfort zone.

Fear holds us back. You don’t have to white-knuckle it through every instance of public speaking. Try a few of these tricks and tips. Practice.

Walk up to the microphone… and speak as only you can.