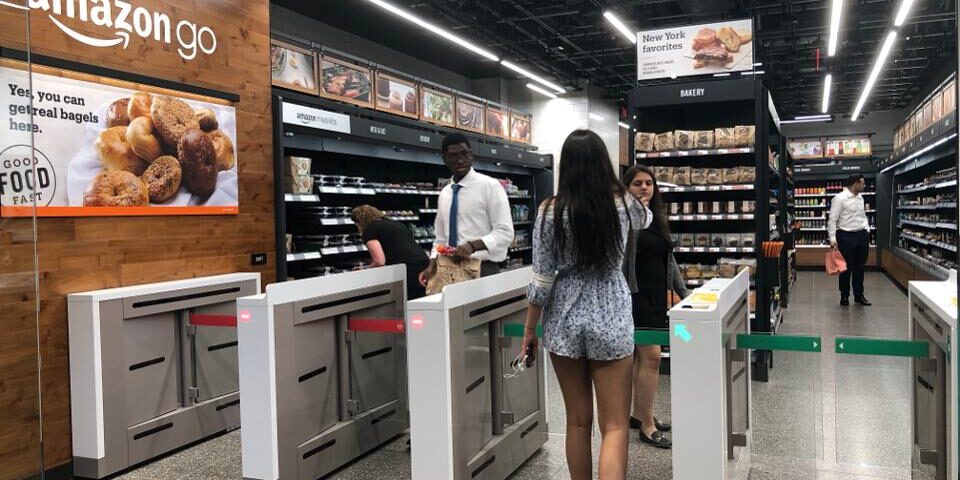 No lines? No checkout? No way!

Take what you want and go? That’s exactly the promise of Amazon Go.

Amazon’s new checkout-less convenience store, Amazon Go, is open to the public at a beta-testing location in Seattle—with further stores planned for the “emerald city” and Los Angeles. No tedious queuing, simply present your phone with the Amazon Go app at the entrance and go shopping!

HOW DOES AMAZON GO WORK?

Amazon Go is possible because of the same kinds of technologies used in self-driving cars: computer vision, sensor fusion, and deep learning. Basically, a bunch of cameras and other sensors follow your progress through the store. Amazon’s patented “Just Walk Out” technology automatically detects when you lift products from shelves or put them back, and tracks them in a “virtual” shopping cart. When you’re done shopping, you just go.

You’ll receive a receipt on your app and your purchases will be billed to your Amazon account.

Essentially Amazon are merging the technology-based experience of ecommerce with the convenience of a brick-and-mortar store. It potentially offers a wealth of data for Amazon to track shoppers’ online and offline purchasing behaviors. They’ll know the time you spend in-store, how often you come back, and how your offline spending relates to online shopping.

The implications for retail staff are all too obvious. There are no jobs for cashiers at Amazon Go.

While self-checkout machines have been growing in Europe, and Australasia, they are much less common in the US.

3.4 million work as cashiers, making up almost 6% of the total workforce. It’s the country’s 2nd most common job.

Amazon Go stores will employ workers. There’s a greeter waiting at the entrance, staff who prepare fresh food in a kitchen visible to passersby, and a staff member to check IDs in the alcohol selection.

But if Amazon Go becomes the norm, job losses in this sector will be considerable.

There are also deeper issues.

Tracking a customer’s every movement in the store, Amazon has created a new level of personal surveillance which may not stop once you walk out the door. Your shopping on and offline could be continually tracked. Customers could not only be followed by cameras; store surveillance could be extended to microphones.

Lest we forget—monitoring by the state was an integral part of people-control in the Soviet-led Communist era.

Commentators have pointed out how similar the concept is to the source of the company’s largest profits: Amazon Web Services. So, what are Amazon’s ultimate plans for Amazon Go?

Just over a decade ago Amazon realized that the platform its online ecommerce business was based, could be licensed to other companies. Today that cloud computing component of Amazon’s business is on track to bring in over $10 billion per year in revenue.

Netflix, NAZA, Pinterest, Reddit and the CIA are all hosted on AWS (as the business is known). AWS has been the financial life preserver that Amazon desperately needed when other departments were floundering.

It’s easy to see how Amazon’s patented walk-in-walk-out payment system is like their Amazon Web Services framework. It could be easily licenced to supermarkets and retail chains.

Amazon Go is AWS for bricks and mortar retail.

Amazon Go shows that 22 years on (yeah, it’s been that long), Amazon isn’t running out of ideas. Amazon has perfectly taken on the concept of the “convenience” store and come up with a way to make it… convenient… and spell the end of shopping line hell!

The deeper question then becomes: Are we today, willing to trade personal freedom for shopping convenience?