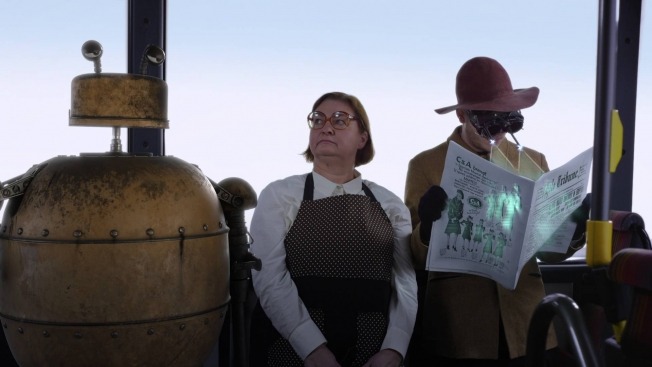 Turns out cockroaches won't be the only form of sustenance to survive the pending climate apocalypse. Decades from now, the survival of the human race may well rely on classic baked bread … garnished with a bit of ground cricket.

Oh, and humans will at some point develop fully robotic limbs and long, sticky reptilian tongues.

Edelman Deportivo, a Stockholm-based creative agency, made these predictions in a very curious campaign for Brödinstitutet, or "The Bread Institute." The organization, which is part of a trade group representing Swedish bakers and dessert-makers, is best known for a campaign encouraging Swedes to eat six to eight slices of bread a day—but its members are a little concerned that baked dough might be losing its cool as more Europeans embrace the low-carb Mediterranean diet.

To illustrate the bakers' efforts to bring back bread, the team in Stockholm created a microsite and short, sci-fi-style film elaborating on the "Bread the Future" theme.

Flying subway cars? Lunch ladies with multiple personality disorders? "Rooftop gardens" one step away from certain death? We think you'll agree the film was both fascinating and terrifying.

Ultimately, though, it's all about the efficiency of the bread.

"83 percent of all Swedes say that they like bread, but because of new health trends, the consumption has decreased," Edelman Deportivo creative director Mårten Hedbom tells AdFreak. "We wanted to change that by highlighting bread's climate benefits. To start the conversation we used our climate-friendly eight-legged friends to carry out our message."

The agency wasn't alone in its quest to help the humans of the present day learn all about our shared future as bread fanatics. Hedbom tells AdFreak, "To earn the consumers' attention, we got the filmmakers of the popular short film Kung Fury to make our story about bread in the future come alive."

Swedish teens were surprisingly receptive. "We challenged kids to swop their school lunch for bread with bugs, and they were brave," says Hedbom. "Their reactions surved as content in social media."