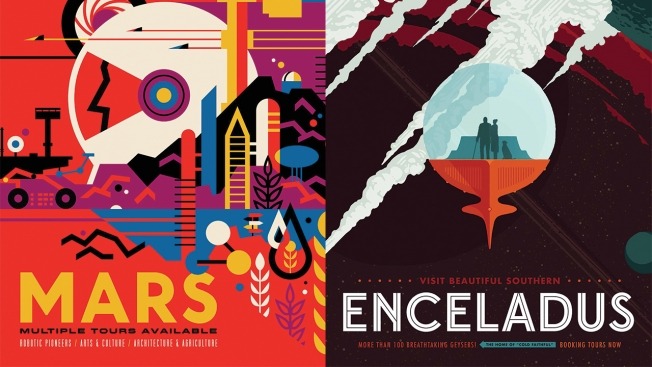 Between Interstellar and The Martian, NASA's enjoying a banner pop culture revival. To tap into that growing awareness of what lies before us, the space agency's Jet Propulsion Lab commissioned Seattle-based Invisible Creature to produce a series of lush retro space-tourism posters.

The work is a preview of what to expect from the JPL's 2016 Visions of the Future calendar. "The Grand Voyage," above, was inspired by '60s sci-fi paperback covers and represents how Jupiter, Saturn, Uranus and Neptune align once every 175 years. Its last alignment, which happened in 1977, enabled the JPL to take advantage of their proximity to send two probes, Voyager 1 and Voyager 2, on a path to visit all four on the same trip.

Invisible Creature's take on the phenomenon represents the Grand Voyage as a bicentennial festival, a moment worth sharing with the kids once every five generations: "Experience the charm of gravity assists," it proclaims, in just-as-charming typography.

The second poster has more of an early-'70s feel, and uses flower-power imagery to add a subtle terraforming message to this image of Mars.

"For that one, we were trying to imagine what Mars would look like as a historic travel destination hundreds of years from now," Invisble Creature co-founder Don Clark told FastCoDesign. A final poster represents Enceladus, Saturn's ice-encrusted moon, also known for its cryovolcanoes, which emit ammonia and methane. Dubbed "Cold Faithful" here, the work suggests tourists will visit such sites the same way we do Yosemite and other National Parks today.

"My brother Ryan illustrated this one," says Clark, "and he imagined this old NASA engineer at the end of his career, actually visiting Enceladus in a spaceship he invented." Invisible Creature was founded more than 10 years ago by Don and Ryan Clark, who've worked on branding and packaging for the Foo Fighters, Kendrick Lamar and Alice in Chains, among others. Per FastCoDesign, this space foray sits neatly in the history of their family: Their grandfather was an illustrator for the Ames Research Center who spent 30 years helping NASA imagine the future.

The posters are available for purchase in the agency's online store, or you can just download them for free in high-res from NASA.

Here are a few more images from the calendar, though we're not sure who designed the ones below: