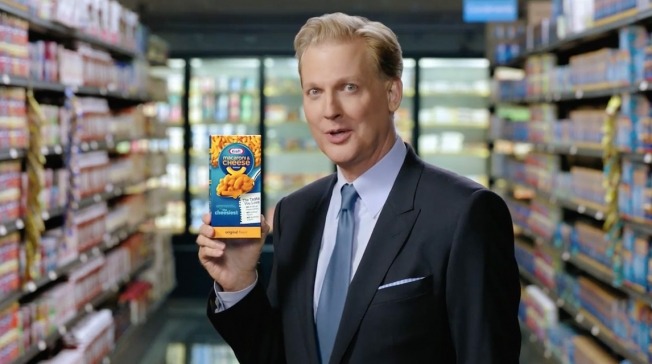 If you were among the junk-food fans anxious that a more natural Kraft Macaroni & Cheese would be less tasty, lay your worries to rest: You might already have tasted it and not been the wiser.

In a ballsy, brilliant bit of marketing, Kraft hoodwinked millions of consumers into taste-tasting an updated version of its classic product. After announcing plans last year to remove artificial coloring and preservatives from its recipe, some worried that it would ruin a beloved (if questionably neon) meal. So Kraft rolled its upgraded version recipe out to shelves in December … without telling anyone.

Three months later, a new campaign—created by Crispin Porter + Bogusky and starring comedian Craig Kilborn—celebrates the fact that Mac & Cheese lovers have gone on loving the product because they didn't even realize it had changed. (For reference, the new version contains spices like paprika, annatto and turmeric to replace dyes like yellow 5 and 6.)

The 45-second faux-epic TV spot breaks the news with a string of jokes about all the types of people—and animals—that missed the switch. The "sneaky moms" line in particular rings like a subtle allusion to a 2011 viral video featuring indignant kids who thought their mother had eaten all their Halloween candy—a gag made famous by Jimmy Kimmel, who launched his late-night talk show back in 2003, shortly before Kilborn quit The Daily Show.

Some cracks are more obvious. The brand and its agency couldn't resist a dig at millennials, which is amusing but low-hanging fruit. Others are counterintuitively clever, even self-deprecating: Obviously the dogs didn't notice the difference between old and new Mac & Cheese; they're not exactly known for the nuance of their palates. And some are just funny—like the guy who claimed he's working from home but isn't.

The tagline, "It's changed but it hasn't," works oddly well. It's the kind of obnoxious non-statement that should be avoided. On repeated listening, it gets even tougher to swallow—grating, even. But given the iconic status of Kraft's golden goo, the brand is right to trade on familiarity while signaling that it's improved its product.

While "all-natural" labels (not exactly what Kraft is claiming here) are famously meaningless, the company's change followed consumer uprising about the artificial dyes in the meal, led by controversial food blogger Vani Hari, as well as the rise of "healthy" competitors like Annie's Homegrown, which chipped away at Kraft's market dominance. (Founded in 1989, Annie's launched its first national advertising campaign last fall. It was created by Fearless Unlimited, a new shop founded by CP+B namesake Alex Bogusky, the Kraft agency's former wünderkind).

Overall, Kraft's approach is a fresh and topical way to serve a message that boils down to a basic point: "Look how much people love our product." As for sales of the new version, an exec in the behind-the-scenes video below says the conglomerate has moved 50 million boxes in the relevant period—"the same as always."

Complete with wide-eyed testimonials, this peek behind the curtain rounds out a campaign blitz that includes print and additional digital components, emphasizing that people "just didn't notice" the swap (including a tweet that claims "55,000 more people tweeted about squirrels" than the new recipe). That observation is consistent with independent (and anecdotal) taste tests conducted last June by the Huffington Post, which managed to get its hands on a box of the new stuff.