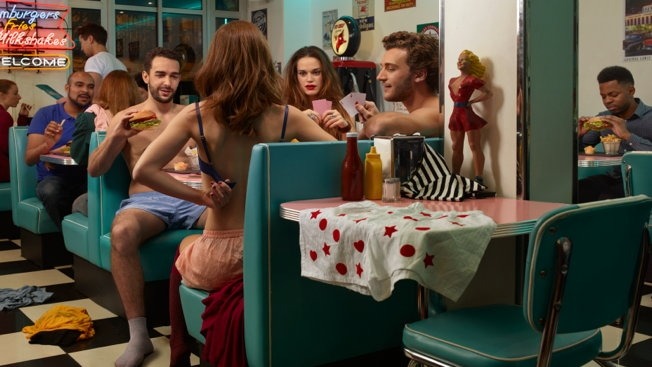 A few years ago here in Paris, people were hard-pressed to find a food delivery service. This changed with the launch of Allo Resto, which enabled Parisians to score delivery from lots of different kinds of restaurants—as long as they were reasonably close to home and you didn't mind waiting, like, two hours.

Those grievances were annoying, but it didn't really matter because Allo Resto was alone in the market. Today, though, it faces tons of competition from faster, more efficient brands, including Uber Eats, Deliveroo and Foodora—which can deliver food from higher-scale restaurants, further away, in an average of 30 minutes.

So, to build some brand equity back up, Allo Resto tapped agency La Chose to launch an ad campaign that highlights its diversity of food options and the perks of eating at home. The concept is simple: Each ad focuses on a table in the middle of a crowded restaurant, where a group of people—or just one person—is behaving a little too comfortably in a public setting.

The most recent one, "The American Resto," features a group of friends playing some variation of a strip card game. The gag is super-visual and fast-paced, with little touches—like clothes strewn on the heads of other patrons—that drive it home:

You've probably observed that nakedness seems to be a theme in French ads, though we will point out that there are lots of great ads where people wear clothes. But it is true that nakedness as comic relief is more common here than in the US. Just sayin': We noticed you noticing.

Previous variants of the Allo Resto campaign are untranslated, but easy to get at a glance and feature people who are (more or less) fully dressed.

In "The Italian Resto," launched two months ago, a father chases his kids around a table while playing a raucous game of "cowboys and Indians," another trope you don't see much in the American market … at least not anymore:

And in "The Japanese Resto," launched in December, a girl in a towel and face mask lounges over her rolls while chatting obnoxiously on the phone with a friend:

Each ends with the same tagline: "Allo Resto: Restaurant food, home comforts." So, go do you without bothering anyone, and order at home where you can play strip poker, or whatever it is you like, without weirding anybody out. (But if you really want your food before the game's over, maybe try Deliveroo or Foodora. It's a problem!)