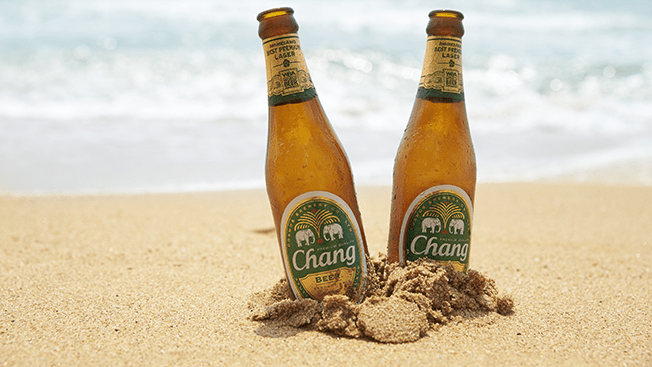 If you've dined in one of the 5,000 or so Thai restaurants in the U.S. (and bothered to check its beverage selection), you may have noticed a beer called Chang. Brewed in Thailand, Chang (actually pronounced "chong") is Thai for elephant. And much like an elephant, Chang beer is moving with a slow and steady determination. After a decade of building a limited U.S. presence, the brand is ready to go national.

"For the past 10 years, our focus has always been Asian or Thai Americans who dine in Thai restaurants," said Sarunee Suthikulpanit, marketing manager for Chang Beer USA. "But we want to broaden our brand to a bigger consumer crowd." By that, she means the average American beer drinker, whether he's eating in a Thai restaurant or not.

To that end, Chang is launching an augmented-reality feature next month that will let drinkers scan a Chang logo or bottle to be transported to a new digital hub populated by video games, song lists and other "branded experiences," including a chance to become the brand's first "digital ambassador." Chang also plans to broaden its involvement with Muay Thai, Thailand's unapologetically rough brand of mixed martial arts, by sponsoring fights in New York, Los Angeles and Las Vegas in conjunction with Friday Night Fights.

Kristin Wardian, a digital content strategist Chang has retained for these efforts, explained that after gaining a following among Thai Americans, the beer brand "is looking to target more millennial consumers, a younger segment who are into digital and mobile and are more apt to explore different cultures." It's a noble goal to be sure—but it won't be an easy one.

Chang has done its homework on America. According to its sales materials, Asian beer sales in the U.S. are up 6 percent against an international beer category that's otherwise flat. Chang has a number of awards under its belt, including a 2011 World Beer Awards medal for Asia's best premium lager, and it's generally on solid ground when it claims that American consumers "are seeking brands from exotic locations."

But Chang is also making its move at a rough time for the U.S. beer market. Not only has per capita beer consumption been dropping for a generation, once dominant labels like Miller and Budweiser suffered 25 percent dips in sales between 2009 and 2014 (one reason the megabrewers want to merge). If there's one bright spot, it's craft beer sales—a trend largely driven by twenty-somethings.

But while Chang might be aiming for those twenty-something drinkers, beer industry consultant Matt Simpson points out that Chang is not a craft brew and will have a "hard time" getting attention.

"Chang is a pale lager—like Asahi for Japan and Budweiser for the U.S.," he said. "There's a pale lager for every country in the world, and theirs is no better than anyone else's."

Millennials, Simpson continued, "know all about pale lagers already, [and] they don't need to know where it's coming from or if it has a great story. Honestly, any beer entering the market, unless it's already attached to a craft beer, has no chance."

Suthikulpanit is well aware of the challenges Chang faces, in particular being dropped into the "Asian beer" category by default. "Even the big brands like Sapporo are limited in terms of how consumers see them," she said. "When you talk about anything Asian, people think of food. So we have the challenge of being in that category—we're not a lifestyle beer."

Nevertheless, Chang does have an unusual flavor—its citrus taste is intended to cut through spicy foods—that at least sets it apart from the Millers and Buds of the world. Chang's labeling also marks it as a relatively exotic brew (even if the white elephant logo is metaphorically unfortunate).

Suthikulpanit adds that millennials' willingness to break with convention and try new things may well work to Chang's advantage, especially when the brand's digital marketing initiatives kick in. "Our campaign is about a younger generation living and experiencing things," she said. "If they want to try an Asian beer, we want to be that beer."