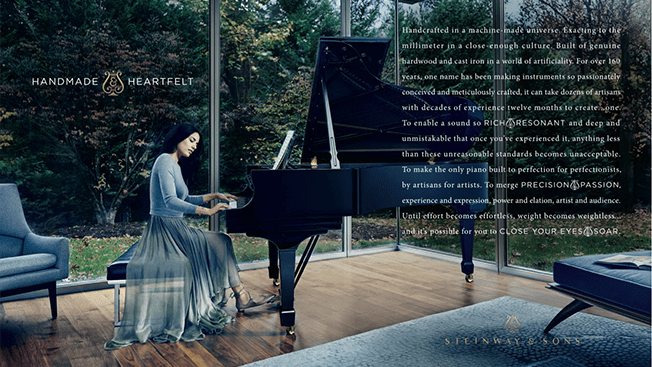 Maroon 5 keyboardist Jesse Carmichael is a pretty Zen kind of guy, at least that's the way he's portrayed in a new 90-second online video for Steinway & Sons. Just back from a grueling tour with his Grammy-winning rock band, the flannel-clad Carmichael seeks solace in his book-filled music room, where a long black piano stretches out atop an Aztec rug.

"I come home from a Maroon 5 tour, and maybe I've spent a month and a half traveling from a different city to a different city every day," Carmichael's voice narrates as he plays in the spot below. "This piano physically connects me back to being home."

The piano in question (a Model B grand with an ebony satin finish) is an attention grabber. And so is the video: It's one part of a sweeping new marketing effort for the American piano maker—the largest branding initiative in its 163-year history. Some of the pieces quietly appeared this week; the ad campaign makes its official debut Monday.

Synonymous with concert hall pianos, Steinway might seem like one of those rare companies that doesn't need to do much marketing. And, in fact, Steinway generally hasn't. But the acoustic piano business isn't what it used to be. At a time when fewer kids are taking lessons, electronic keyboards have steadily gnawed at market share and competition from less expensive foreign brands rumbles like a minor chord, even the legendary Steinway sees the need to sing its own praises.

"There are drastic changes in the market, and it's up to us to do something about it," said Steinway CMO Darren Marshall. "We have an absolutely iconic brand, a product that is the peak of quality and excellence, and we have such a great equity in that space, but we haven't talked about it in a long time."

In fact, he added, "We haven't talked about anything in a long time."

Steinway is talking now—with a series of videos featuring influential tastemakers, a revamped website and a new ad campaign. In some instances its message is a familiar one: Steinway pianos are still made by hand, here in the United States. But Steinway is also attempting to present itself as a brand in step with the digital times.

The push for young consumers

Seeking to draw not just affluent customers but younger ones, Steinway is rolling out Spirio, a digitally-driven player piano system integrated into its Model M and B grands. Using a complimentary iPad with a pre-downloaded app, the piano's owner can select from thousands of songs and then sit back while his piano "performs" in concert quality. The technology not only nudges Steinway into the realm of home entertainment, it's calculated to turn culturally sophisticated consumers who can't play the piano into piano buyers.

At a time when many are lamenting the loss of American manufacturing, Steinway has invested heavily in reminding the public that its instruments have been made just across the river from Manhattan since 1871. A video titled "Precision & Passion" (watch it below) takes viewers on a walk through its factory in Astoria, New York, where wood shavings cover the floor and each piano—some costing in the neighborhood of $160,000—takes a full year to complete. Cinematic and dreamy, the short film nevertheless carries a pointed message for a culture hooked on apps and fast fashion: Steinways are "handmade in a machine-made universe" and "built of hardwood and cast iron in a world of artificiality."

"This is a definite point of differentiation for us—our craftsmen, and the point that no two Steinways are exactly alike," said Christina Lilly, Steinway's vp of global marketing. In 2013, when hedge fund titan John Paulson acquired Steinway for $512 million, many worried that a Wall Street owner would sell the land under Steinway's factory and send manufacturing overseas. But that hasn't happened. In fact, according to the company, Paulson (whose funding has made the current marketing initiative possible) has invested in the New York factory's infrastructure—possibly because he recognized it as one of Steinway's major differentiators. "If we could give everyone in the world a factory tour, we would do it," Lilly added. "What we're trying to capture with this film is that spirit."

brightcove.createExperiences();But another thing Steinway is trying to capture is a new generation, and that's what the bulk of its marketing effort sets out to accomplish. The task will require the correction of some long-held associations. For decades, the Steinway name has conjured images of stuffy concerts at Carnegie Hall or, as Marshall put it, of "old white-haired guys playing classical piano."

'You don't have to be a professional to enjoy it'

Broadening the brand's appeal was the goal behind making a video with Maroon 5's Carmichael, where the unshaven rock star happily pecks at his concert grand in his socks. A video starring fashion designer Josie Natori, who's played the piano since she was 4, will also debut soon. Steinway plans to release between six and eight more videos this year, all of them showing interesting, successful people who may not have white hair but do have Steinways.

In fact, attracting this demographic is so critical that the company has coined a term for them: "cultured achievers."

"Cultured achievers have to fall within the threshold of people or a group of people who can afford one of the finest instruments in the world—and who can appreciate it," said David Cameron, CEO of Light + Co., which developed a new series of print ads that will begin appearing in upscale lifestyle and travel magazines including Departures and Elle Décor. "Our belief is that people who achieve at the very highest level in business or sports or medicine, or whatever it was that got them to where they are, can appreciate a Steinway." One of these ads—"Handmade and Heartfelt," shot by portraitist Miller Mobley—pictures a young lady in a blue chiffon dress, playing her Steinway grand in a postmodern living room with glass curtain walls and midcentury furniture. The message, Lilly said, isn't just to "break down the barrier of intimidation" that has risen up around Steinway—i.e., that only concert pianists should own them—but to show that "there are many influential people who have our pianos in their homes and enjoy them on a daily basis. You don't have to be a professional to enjoy it."

In fact, you don't even have to be pianist to enjoy it.

Much of Steinway's bid to draw a broader range of buyers rests on its new Spirio feature, whose mechanism is integrated into the piano's action and hidden from view. The user need only tap on his or her iPad to choose from Steinway's library of recordings, which range from classical to jazz. "So what that means," Marshall said, "is I can have friends over, and instead of putting on the stereo, it's my piano that's playing."

Player pianos (which debuted in the 1890s) are hardly a new idea. What distinguishes Spirio is a proprietary digital technology that captures the performance dynamics of a piece of music during the recording—including hammer velocity and pedal technique—allowing the playback to convey the style of the performer. A user cueing up Liszt's Romantic Liebestraum, for example, will hear the piece's lush cascades rendered exactly as concert pianist Lang Lang played them. The company keeps a large stable of "Steinway Artists," including Regina Spector and Billy Joel, many of whose performances are in the Spirio library.

But will these efforts be enough to win Steinway the new generation of customers it wants? Perhaps.

Pianos were an easier sell in 1910

These are challenging times for the piano business in general. According to the National Association of Music Merchants, while Americans purchased 35,000 grand pianos in 2004, by 2013 that number had slid to 17,000. Acoustic piano sales were once as high as 365,000 a year—but that was in 1910.

What's more, today's parents aren't forcing their children into piano lessons as they did in generations past. Kids, it seems, would much rather play football or soccer or the guitar. According to a 2005 study for the Piano Manufacturers' Association International, 89 percent of respondents claimed "too many other activities" as the reason why a child abandons piano lessons. A few years ago, The New York Times ran a story about how the American family's grand piano is more likely to be dumped in a landfill than bequeathed to the next generation. (Though the exception, the newspaper noted, was Steinway.) Steinway's efforts to update and revitalize its brand are encouraging to longtime devotees like Sara Faust, founder and president of Faust Harrison Pianos in New York, though she believes the maker's challenges will not be easily dispelled by a marketing campaign.

"We need Steinway to be strong, because a strong parent company translates into a strong name, and I love Steinway," said Faust, who was a concert pianist before she opened her showroom a block from Carnegie Hall. "But there's more competition out there."

Yamaha's AvantGrand, for example, is a hybrid with a piano's touch but digital guts. "Responsively, they're better than Steinways, and we sell a crate load of them," Faust said. "You'll find a lot of families who are saying, 'I can afford a Steinway but the AvantGrand gives me other things—and my kids like all these buttons.'"

As for the Spirio, Faust believes it's comparable to Yamaha's Disklavier. "Unfortunately, there's nothing new about it," she said. (Steinway maintains that Spirio's resolution is superior to Yamaha's.) Faust also expresses a feeling—not uncommon among aficionados—that the Steinways of the early 1900s were better than those being made now.

It's still too early to tell how many new customers will follow the music to Steinway's door, but the company's CMO is confident that cultured consumers will respond both to Spirio and to a reminder that Steinway, unlike so many other venerable American companies, still handcrafts its products in America.

"There's a move back to things that are handmade," Marshall said, "and we've been doing that for 163 years. It's just a question of telling the story in a beautiful way."