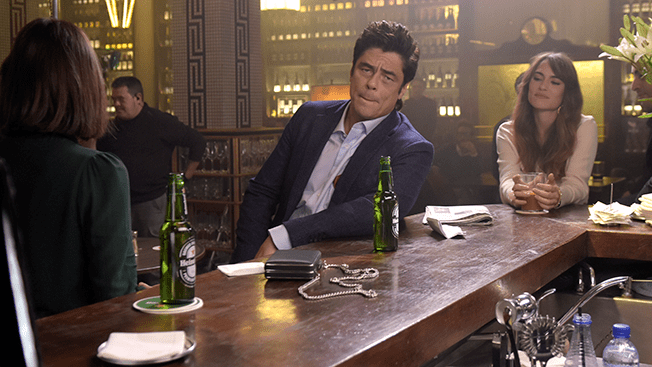 Benicio del Toro has a problem. The Oscar-winning actor is famous, charming and rife with rugged good looks—yet the public still confuses him for other leading men. It's a strange situation for a celebrity: Being the sort of star that people assume they know, even though they don't.

As it turns out, del Toro's not alone: Heineken has the same problem.

The European pilsner has been around for 143 years, is sold in 192 countries, and the red star on its deep-green bottle is a symbol most every beer drinker knows. But do they really? Heineken thinks not, and has enlisted the help of del Toro for a new global advertising campaign that kicks off today.

Its slogan: "There's more behind the star."

The campaign will feature three TV spots in both English and Spanish, along with several shorts just for the Web. Though the effort is launching in 70 international markets, it'll focus mainly on the United States. It's here, said Heineken USA CMO Nuno Teles, where beer drinkers need the most tutoring on his brand.

"The U.S. is our No. 1 country," Teles told Adweek. "We know that we are respected as a brand here—but we are not known as a brand. That is the purpose of this campaign, to let them know Heineken more, as well as to know Benicio, which they also don't know that well."

This metaphoric parallel—two famous names that aren't as well understood as they deserve to be—plays out in the campaign's inaugural spot, called "Famous" (watch it below). In it, del Toro talks about Heineken's global fame as he relaxes with two attractive women at a Barcelona restaurant. Suddenly, a tourist couple interrupts him to ask for a selfie. Del Toro obliges, only to be caught short when he overhears his fans address him as Antonio Banderas.

"There's a great correlation between Benicio and the beer," said Andy Bird, CCO of Publicis Worldwide, the agency behind the creative effort. "Since there are a lot of things behind both that people don't know."

But what could drinkers not know about Heineken? The imported beer has been available stateside for 82 years now (the first shipment from Holland arrived in New Jersey three days after Prohibition's repeal), so it's not like Heineken is an obscure new import.

The problem, in Heineken's view, is that while millions know the beer's name, they don't know the traditions and heritage behind it—such as the fact that Heineken still follows its original recipe, still has only three ingredients and is still family owned. "We have 140 years of brewing history," explained svp Ralph Rijks, "but we've talked very little about the product itself, about the beer itself."

As Teles recounts, what American drinkers do know about Heineken is how it tastes—a malty, slightly bitter flavor that comes from the A-yeast developed by Gerard Heineken in the mid 19th century—but the awareness largely ends there.

"When I came to the U.S. from Brazil two years ago, I talked to bartenders and consumers. Few of them knew Heineken was family owned," Teles said. "I'd ask them, 'Did you know we brew in horizontal, not vertical tanks? Did you know we only use three ingredients, or that we add yeast as a catalyst and not an ingredient?' And some people don't know. We need to tell that story to consumers."

To help tell it, Heineken cast its own brew master—a bearded gentleman named Willem van Waesberghe—in another spot with del Toro, this one just for the Web. In a largely ad-libbed exchange, del Toro is once again expounding on Heineken's brewing heritage, only to be interrupted by a young lady passing by who recognizes van Waesberghe but not del Toro. (Watch the spot below.)

"The online campaign is extremely funny," Bird said, pointing out that "the interesting thing [about this spot] is that the Heineken brewmaster is the real star."

Del Toro is, by all outward signs, a pretty good sport about being overlooked by everyone. To give the man his due, he really is internationally famous (his popularity with Spanish-speaking audiences was one of the reasons Heineken wanted him). What's more, with del Toro working on a role in Star Wars Episode VIII, his days of going unrecognized will probably be over very soon.