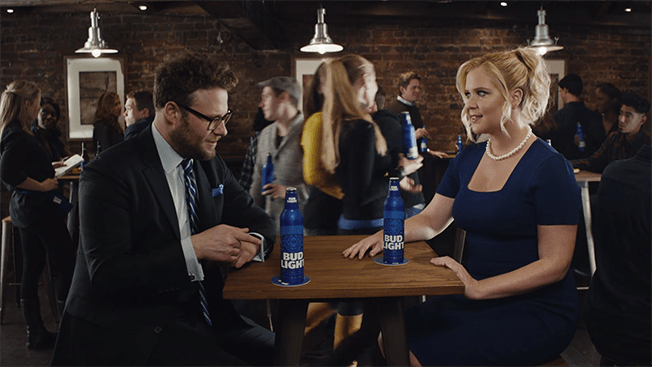 "The Bud Light Party" has ended a little earlier than expected.

AB InBev wrapped up its Wieden + Kennedy campaign starring Amy Schumer and Seth Rogen a few weeks ahead of schedule. The news comes on the heels of the company cutting its revenue forecast for the year in response to a disappointing third quarter that saw declines in Bud Light sales.

Instead, the brand will turn its attention to the Bud Light X Lady Gaga Dive Bar Tour and its NFL-focused marketing efforts.

"We recently wrapped the Bud Light Party campaign, [which was always intended to end in the fall], to transition to Bud Light's NFL programming, supported by strong creative execution and significantly increased coverage of our team cans across the U.S.," said Bud Light senior director of marketing communications Lisa Weser.

In January, the brand pitched the campaign as a political parody—which makes the timing of its conclusion somewhat surprising as the election is still more than a week away. The last ad in "The Bud Light Party" series appears to have been August's gender-identity-focused "Labels," which arrived over a month before the first presidential debate between Hillary Clinton and Donald Trump.

"Despite continued positive signs in brand health evolution, driven by millennials and Hispanics, 3Q was the softest performance of Bud Light for the year from a volume and share perspective," Weser added. "The Bud Light Party campaign helped us improve these brand attributes, but it did not translate to improved volume and share performance. While we are clearly not satisfied with Bud Light's performance, we are already leveraging what we've learned to develop and execute new work."

More recently, W+K launched "This Is Your Can's Year," promoting Bud Light's cans with NFL team logos for the new football season. The brand is now expanding on the popularity of its NFL team branding effort with new team can coolies, promoted in a 15-second spot called "Rival Cans," which aired during a recent Chargers-Raiders game. Team-specific spots promoting the team can coolies will air during broadcasts in different markets, and remaining media leading up to the Super Bowl is expected to focus on football.

"For Q4 and 2017, we are working closely with our creative agency, Wieden + Kennedy, to prepare for the next phase of our campaign for the Super Bowl and beyond," Weser said. "We will also put more focus on sports, where we have had considerable success in the past."